This year’s race season started pretty well – with a sporting TT 1st + course record (did I mention that?!), and two 2nd’s in consecutive crits.

Looking at the 60 women signed up to the ASSOS Women’s Track League at Herne Hill – including a smattering of 1st cats and National level riders, I always knew the Easter weekend was going to be a whole lot more competitive.
Herne Hill velodrome, and ASSOS (thanks Dalany!) have done an excellent job in incentivising a massive sign up rate to the league – including free ASSOS shorts for those who sign up in advance, BC points up for grabs in the A’s, personalised numbers, excellent nerve-reducing weekly training sessions and more.

With the new pavilion built and serving Canopy beer, there was a much more willing and encouraging crowd there to watch, too.

In previous years, there’s been an A and a B category. Last year I rode in the B’s, it being my first season on the track. This year, I signed up for the A’s – but in the end there were so many riders they split us into A, B and C.

I took on the A’s warm up race. There was some really aggressive handling in there, with two near misses in the final sprint lap. I pulled back after the first near pile up, then  after the second one I tried to ride round the outside with about 200m to go but by that point it was far too late so I just finished safely in the bunch.

After much agonising, I chose to race in the B’s for the Points Race. This year’s B’s was basically a collection of last year’s A’s, minus the cream of the crop who had stuck with the top category. There were some faces I recognised in there, which I knew belonged to very competitive legs: Nicole Oh (Les Filles), Aoife Doherty (5th Floor), Charlotte Burford (Sigma Sport WRT) and when best-mate-on-a-bike Cat Gaskell (also Sigma) decided to drop down too it sort of sealed it for me.

Points race was only 8 laps, with points every 2 – which basically means 0.5 laps jostling, 0.5 laps agonising pain, 0.5 laps trying to learn how to breathe again, 0.5 laps just about alive: repeat x 4. By the end it was my throat that hurt more than my legs, perhaps contributed to by the spring air.

Results are still pending, but I came top five in most (all? 4, 1, 3, 2… I think?) of the sprints. With points assigned for top five positions in each, I’ve got a vague chance of a good result, but not sure yet. (*** Update: I got second overall!)

Next up was the Team Sprint, which (thanks to Jayne Pain from Willesden!) I raced with Nicole. No idea how we did as yet – but not my best event type…

The final event was the Scratch Race, with a prize for the lap leader dangled before our noses as well. The ‘lap leader’ prize goes to the rider who crosses the line first, over the greatest number of laps. Last year, I saw it as my goal – breaking off the front of the B’s (now sort of level with the C’s) – but didn’t expect I’d manage the same feat this year. So instead, I sat in with the aim of a position in the overall.

Eleven laps of trying to stay near the front, but not on the front. With 8 down, I remembered the visulisation exercise I’d completed with Dr Josie Perry during our Sports Psychology experiment. I’d practiced the last three laps – played them out in my head.

It all pretty much went to plan – except there was one rider away – so when I sprinted for the finish I think it was 2nd I clinched (but perhaps 3rd if Charlotte from Sigma got me – TBC!) (Update – she did get me! Came 3rd). I am a tiny bit disappointed with myself for not sticking with the A’s – perhaps next time.

Anyway – a fantastic event, really well attended, incredibly well organised – chapeau all! (I bet hits have increased on the HHV Women’s Group whilst we all check for results..)

That was Saturday. On Sunday, I went for a club run, with the intention of taking a rest on Monday. Then I clocked that there was a women’s race on at Hog Hill…

Advanced entry wasn’t an option – this was all entry on the day. Which meant I had no idea what the field would be like.

Arriving, on tired legs, I was a bit concerned to count 7 girls from Cycle Team OnForm warming up outside their team bus, a rider from Ford EcoBoost rolling down the road towards the car park, and a girl in an Aspire Bicycles/HSS skinsuit ready to go.

That didn’t last long – because clearly this was going to be a hard race. Hog Hill’s circuit contains the affectionally named ‘Hoggenberg’ – the profile is quite unique: 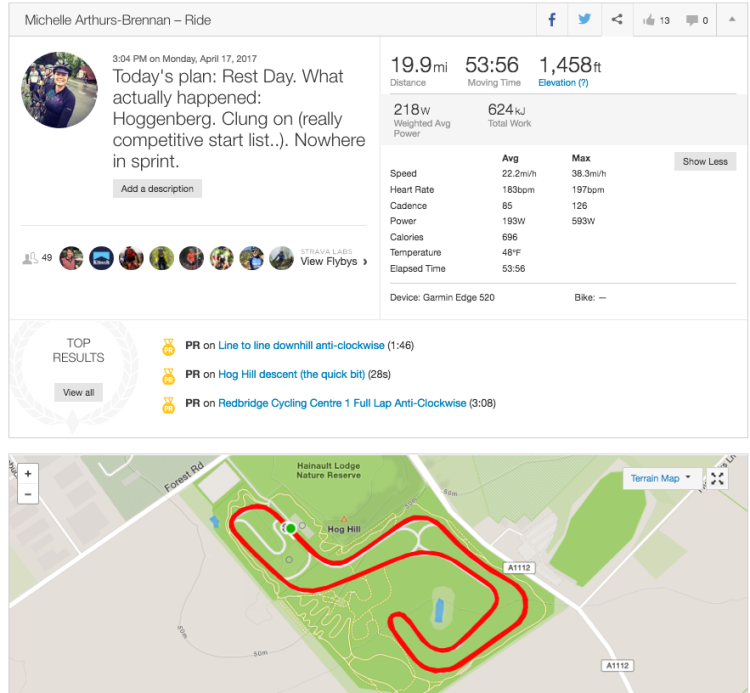 There were so many points during this race where I almost got dropped. But every time, I just tried to get through the next 30 seconds, without thinking about what was coming after that. Tried to move up before the ascent every time, and to stick to wheels I trusted – though in a few cases I found a dodgy one on a descent or corner and almost got separated thanks to a sudden drop in pace.

The lead group thinned out a lot, and I really was quite proud to be hanging in there – though of course you’ve always got to dream a little bit when you’re still in the bunch at the sound of the bell…

The finish line at Hog Hill is, of course, located at the top of the Hoggenberg (where else?). So coming into the final ascent, I positioned myself fairly near the front. Logic being that I could drop back a few places and still do ok. That was the dream.

The reality was, that by the time the road ramped up, the bunch surged and I… well… didn’t. Legs screaming, it was the best I could do to make it to the line with the flag still waving! The win went to Sian Botteley of Team OnForm (true to their name with 3 riders in the top 5). Personally, I really was just proud to have stuck with the changes in pace throughout. Maybe next time I’ll have a little in the tank for the sprint.

With three fairly heavy days in my legs, Tuesday brought the club TT. And of course with that, a slightly more chilled atmosphere!

Being the new kid on the block at Norwood Paragon, I was keen to provide a good time on the rolling Newdigate course – but also aware my legs were getting tired. Rushing from work also meant I was sans Garmin mount (ok, me forgetting the mount was why I didn’t have it, but the rushing was related) – so I’m deducting several seconds for me reaching into my pocket to grab my Garmin and check the numbers four times…

What was most exciting about this evening, however, was the four other women who started alongside me. The club only managed to field 11 riders (would like to see more next week!) but thanks to MDV’s women’s ride initiative, and encouragement from Jennie Murdoch, the club genuinely has a growing female membership – and a selection of women up for testing themselves against the clock.

The boys better watch out, one more female rider next week and we’ll be taking over!

One thought on “Clicking up a gear”