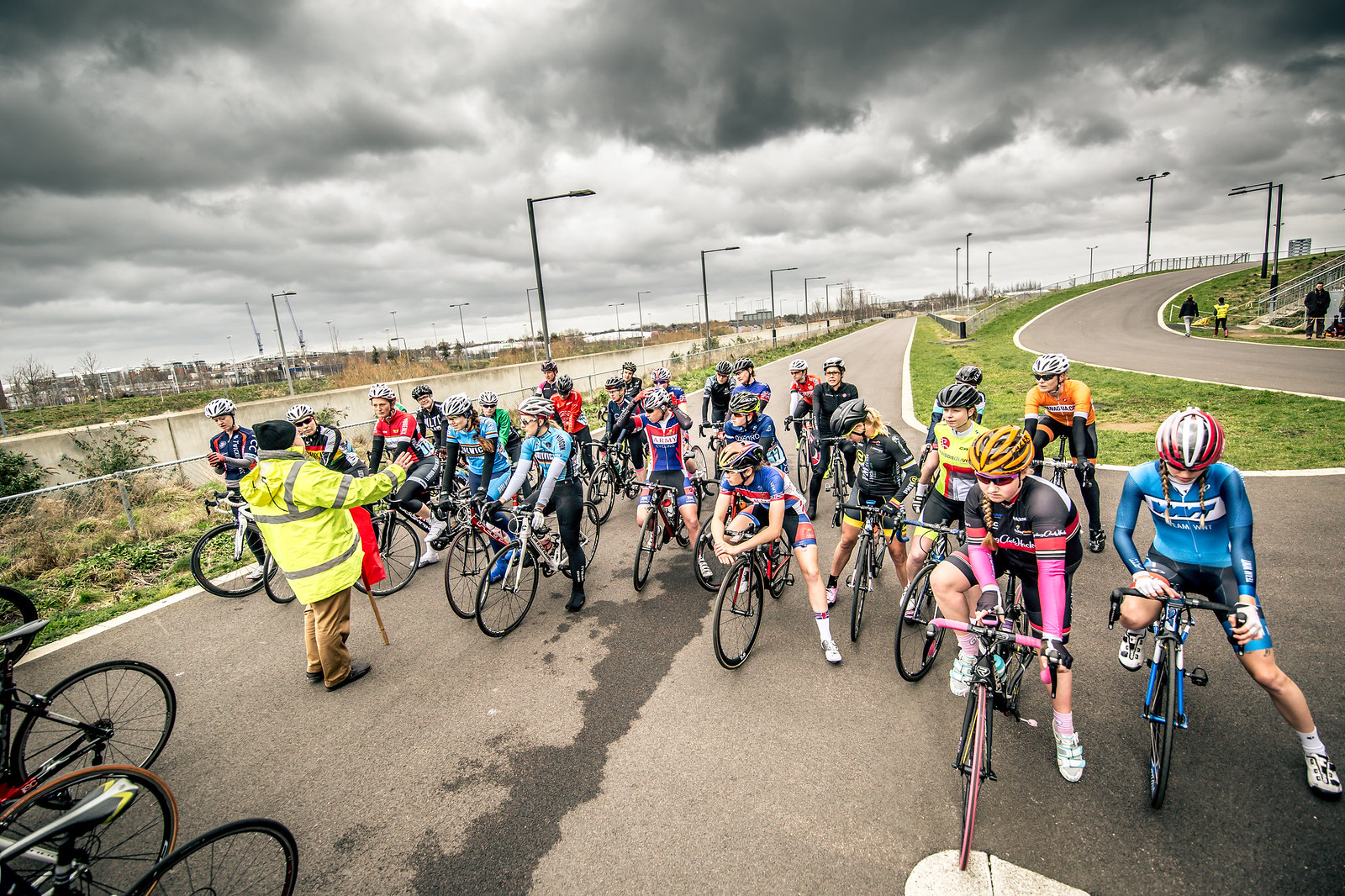 Image embedded from @HuwWilliams  on Flikr  – thanks for braving conditions!

Yesterday’s Lee Valley Velopark race was a proper E/1/2/3/4 – there were a load of girls from Army Cycling Team, plus reps from WNT, PMR, Les Filles and Zappi women – and it was blowing a gale with added sprinkles, so it was always going to be tough. I’ll keep it brief.

The start went ok – clipping in wasn’t completely smooth but I got sorted quickly enough and found myself sitting near the front. The E/1 riders were controlling the pace, slowing down before the ramp on the course and attacking pretty conclusively up it. Through the first few attacks I was actually doing ok… see look, there’s my little shoulder poking out the side of a girl in a WNT skinsuit – not a sign you’ll probably see ever again for a while… 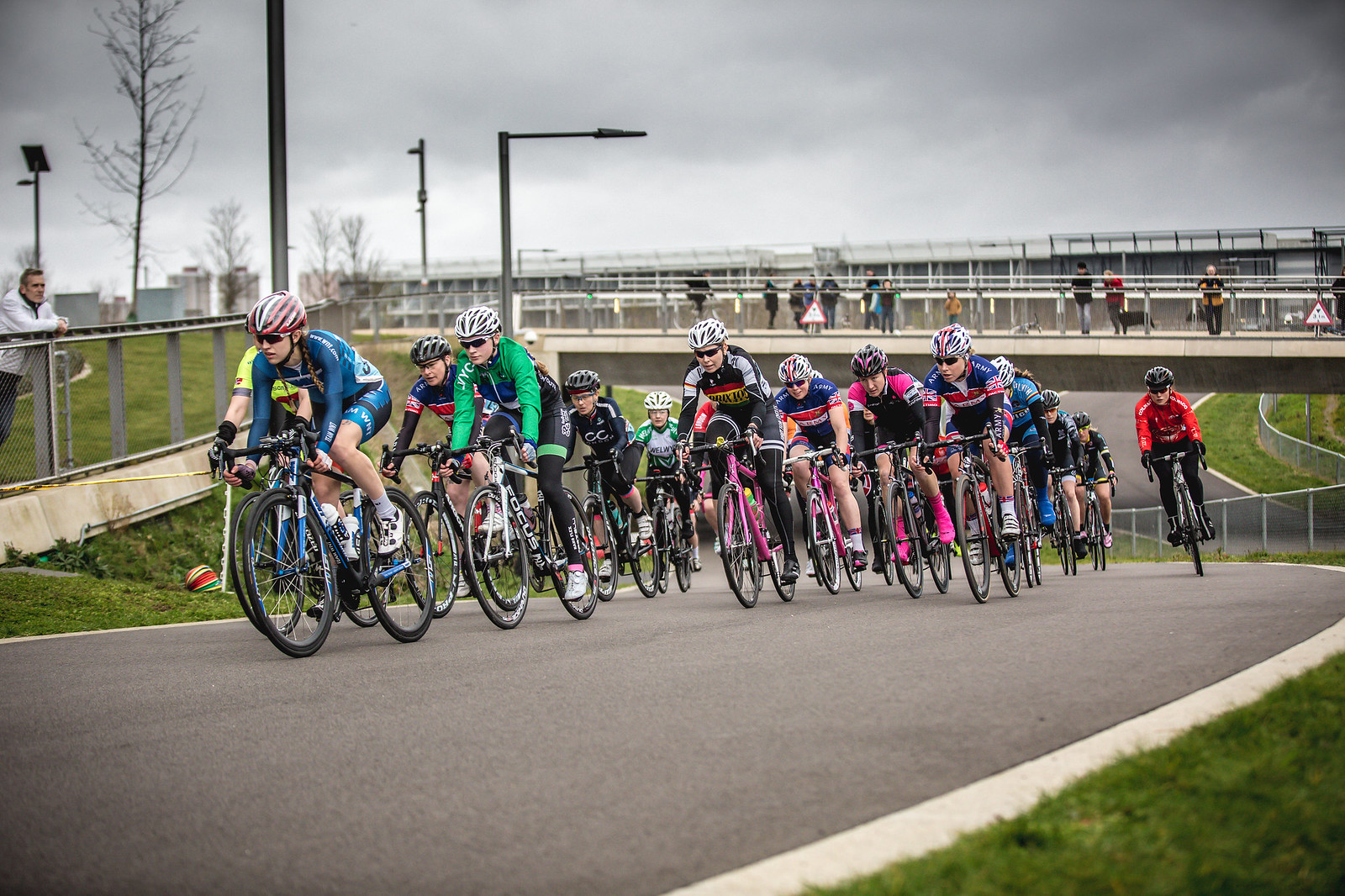 And then I noticed it was getting pretty tough, quick look at my wrist (really need a proper Garmin) and we were 5 minutes in. Oh dear. But I kept working, then at some point there was another attack and someone pounced in front of me, I don’t think actually doing anything wrong but still crossing my wheel on a bend which made me pretty nervous. By this point I was drifting closer to the back.

More attacks and the line was spreading out, I stuck on the wheel of a girl in orange from Panagua CC I remembered being way in front of me last week at Cyclopark, then realised riders were coming past and we were moving backwards. Definitely backwards. Bam.

Six riders broke off the front, I think around six or seven were chasing, and the rest of the 27 total riders were soon pretty spread out. 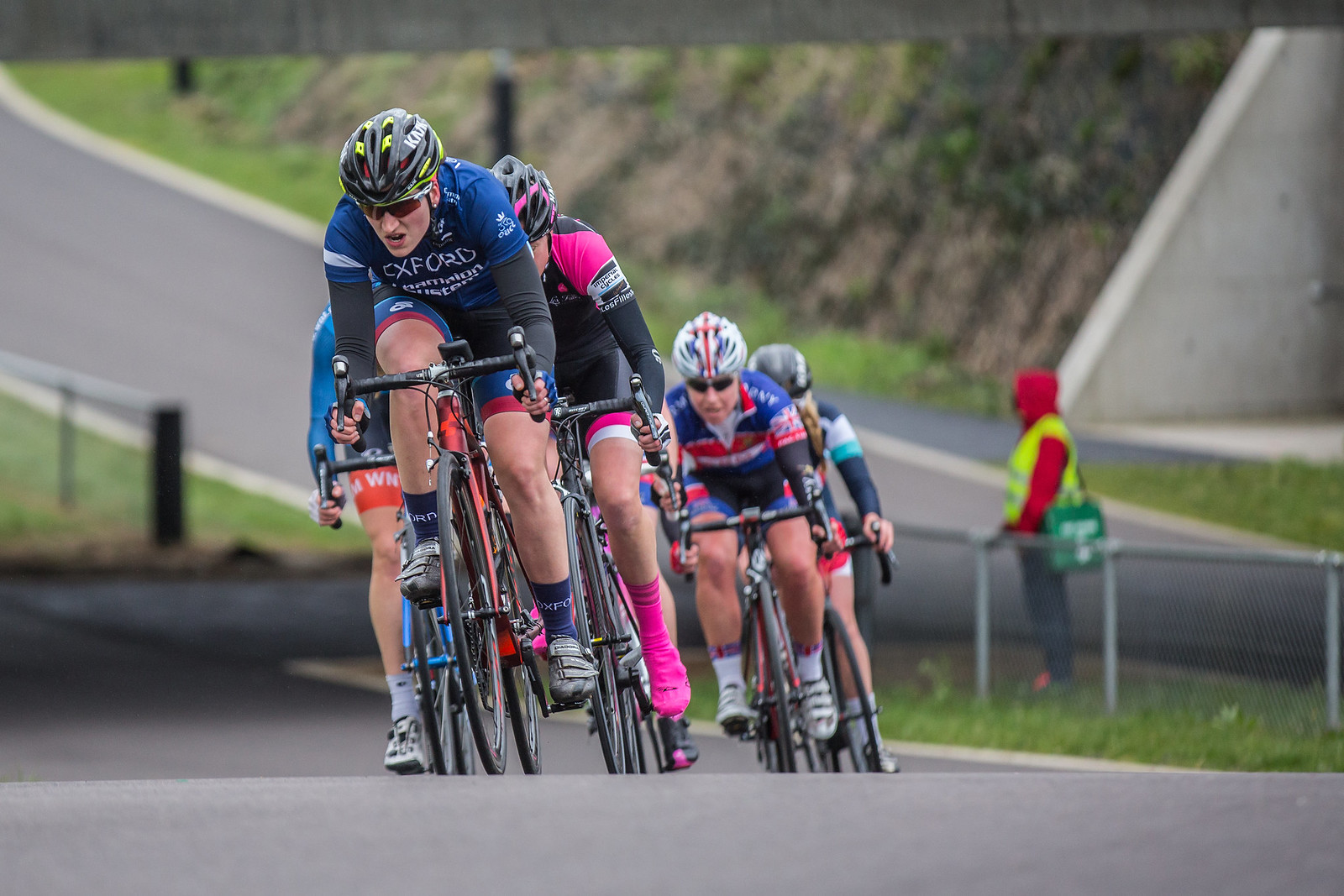 Looking around me, there was the girl from Panagua around 10 metres behind, a girl from VCL just ahead. So I chased up to VCL, then called to Panagua in the hope we’d make a group of three. It wasn’t happening, so VCL and I set off. Eventually we came up upon CharlyCycles (from Dulwich, whose full name I don’t know) and had a group of three.

I’ve never classed myself a climber, but I noticed I kept getting a gap on the steeper ramp outside the velodrome. Maybe I was just looking at the boards wishing I was indoors as the wind howled and nearly blew us off on every exposed bend – though it turns out both the riders who were with me are also Herne Hill track league regulars so I’ll be seeing them on April 9. [They also said after that I should race in the A cat, not the B cat…. decisions!!] Anyway, I felt like we were losing gas a little bit, pottering a bit too much, so I smashed it up the hill and went. Just to see what would happen.

Dulwich came with me, VCL didn’t. Initially Dulwich was a bit pissed at me, but we made up as I breathlessly tried to ask how many riders there were ahead of us. There was one group of six, another of five to seven [I think…], then it seemed like it was mainly empty road and the odd individual, but it was pretty hard to tell. No points – but we might as well work together and chase anyhow. It worked because along the way we found a Welwyn Wheeler. There was around ten minutes left, so our new group of three was probably not going to become any larger, even if there was anyone else between us and the chase group. On the bell lap, Dulwich took first duty on the front, then flicked her wrist and I took a turn, before moving over at the finish straight to join the back, at which point I’m sad to say I kind of died on the last windy stretch and let them have it.

Maybe due to the nature of the course, it was one of those races where you’re not really sure who is who and which group is chasing which group. The front six breakaway riders did indeed lap us, so that was pretty damning, but we hardly saw the second group. However, whilst it felt like we were a slightly damp and morbid dropped mini peloton, I realise actually with 27 starters and about 12 in front of us, there must have been quite a few behind, too. Though it felt pretty hopeless at the time, it looks like those behind us did set up their own groups, yet we held them off, and got some good training in along the way.

It seems that women’s 3/4 races are indeed pretty much as rare as they used to be, but at least in the E/1/2/3/4’s I’m getting good practice. There is a 3/4 on Thursday at Cyclopark, but I also have THE BIGGEST DEADLINE OF MY ENTIRE CAREER on Thursday. Big shiny thing coming, can’t say more. So I might make it, I hope I will, if not, there’s the week after…

Once again, thank you to London Women’s Racing for drawing a great crowd to round three, and to Huw Williams for supporting the league and making pretty pictures of us all looking miserable.