I won’t lie – this post is going to have very little to do with cycling.

In fact, pretty much the only (tenuous) link to cycling/fitness is that these songs have been irritating me for an age, but the irritation came to a head when I heard all three played during one gym session. Seriously, you don’t want to be annoying a girl when she’s holding a kettlebell.

Every time I switch on my radio, I’m treated to one of the following:

I’ve listed the songs in order of “most offensive” – so we’ll start with Usher:

Got all of these niggas they crowding around you like they seen Beyonce in here
You want your own and you need your own, baby, who am I to judge?
Cause how could I ever trip about it when I met you in the club?
I make enough for the both of us, but you dance anyway

And so on. Effectively, what we’re being told here is that this kind Mr Usher gentleman has met a young lady, whilst she was working as a stripper in a club, and now they’ve begun a relationship. Having knowingly entered into this relationship, he’s taking the time to reassure her that he’s “ok” with her choice of occupation – as though this were a bold statement or a particularly kind thing for him to do (thus warranting an entire repetitive song).

Now, I realise such a job might have some effect on Mr Usher’s feelings about his manliness…  But to draw a comparison, would it not seem odd if a person were to meet a potential girlfriend whilst she was working in a coffee shop, then to turn around and say that it’s not “ok” that she works in the coffee shop?

In meeting our lovely lady on the job, he’s already certified he’s “ok” with her occupation, since surely he’d never visit such an establishment if he thought the women there should be earning their money elsewhere.

The opening lines also make me wonder what our young suitor thought of his new misses before they became an item – it seems he’s keen to point out that her occupation “don’t make her a ho”. Well, no – it doesn’t, but you’ve got to wonder, if she chose ‘not to come home’, would she be relegated back to “ho” status? What about the other girls who he isn’t dating, are they just faceless “hos”?

And on top of all that? Ah, yes, Mr Usher likes to point out that he “earns enough for both of us, but you dance anyway” – as though it’s in some way surprising that our (clearly very talented) dancer continues in her profession, when he could sweep her off her feet so she never had to work again.

The whole thing just stinks of patrionising garbage. If you meet a girl dancing in a club, it’s pretty obvious you’ve got to accept she works in the club, and that that doesn’t make her a ho – needing to labour over an entire song pointing out the bloody obvious implies you think it isn’t obvious, or that it’s super bold and courteous of you.

Then there’s Juicy J’s verse (ya know, “If you fuck me like you love me shawty you might get rich”) but I think that kind of speaks for itself. 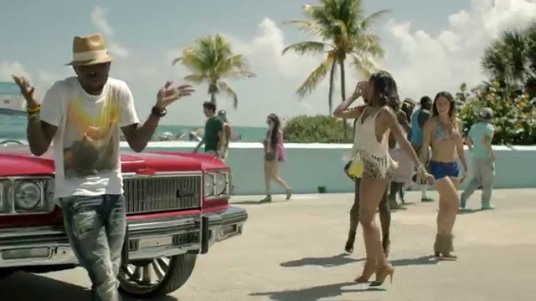 [Verse 2:]
She walks like a model
She grants my wishes like a genie in a bottle (yeah yeah)
Cause I’m the wizard of love
And I got the magic wand
All these other girls are tempting
But I’m empty when you’re gone
And they say

Really – there’s nothing wrong with being there when your  other half needs you – obviously – that’s how relationships work: you’re BOTH THERE for EACH OTHER.

This song just implies Mr OMI is the main event, and his lovely lady is simply standing in the wings waiting for the moment she can be of assistance.

There’s nothing wrong with Mr OMI singing his thanks to his lovely lady either, and you could argue that he is indeed there for her, too – that we’re only hearing one side of the story. All that might stick – except that he’s referring to her as a wish-granting Genie, and to himself as a ‘wizard with a magic wand’ – so basically she’s on call and he’s rubbing that lamp for all it’s worth.

FYI – she might want to ‘freak you’ too, if you learnt some more words. Only ‘she’ is pretty voiceless, faceless, and generally devoid of any human-ness, other than being ‘freakable’.

To be honest, this one doesn’t pretend to be any part of a two way relationship, blatantly everyone meets people they fancy sometimes, it’s just annoying in this case the object of affection has no other distinguishing features aside from being ‘tight’. If it wasn’t for the other two songs, I’d probably not bat an eyelid.

All three of them together, though, just make chart radio stations feel like a sausage fest to me – and I can’t say hearing all three when chucking my kettlebell around in the gym made me feel all that empowered.

I say bring back Poly Styrene… :

0 comments on “Oh Bondage Up Yours: Three Painfully Sexist Songs Getting on my Nerves Right Now”