Yesterday, Mr Brennan and I returned from our adventure round France.

We had a leisurely start because Brennan had been busy coming 8th in the Tour of Sussex and wasn’t chomping at the bit to exit the house at 8am (I was). By the time we were packed and good to go, it was about 11.30am – but this being said, we did have until 11pm to get the 70 or so miles to Portsmouth.

Getting used to the touring bike took a couple of miles – the fact that your are suddenly so much wider, that you actually have to push quite hard on the flat, and that you need to utilise a fair bit of core strength to hold the bike underneath you when out the saddle. Still – we had plenty of time to become accustomed… 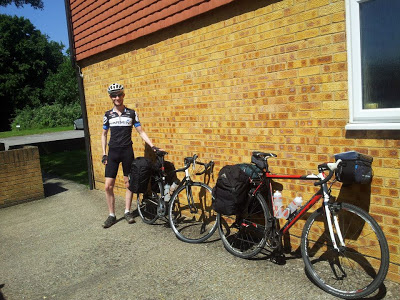 We planned a route that included a pit stop in Petworth – a beautiful little town where we were accosted by a very friendly Philosophy student from Sussex Uni – whom I lent a puncture repair patch to and discussed politics with. He went on his way, and was replaced by an older couple who wanted to know where we were going with all our kit. We actually seemed to be attracting curious strangers like honey does bees – but thankfully they didn’t all need puncture supplies.

There was a big fat climb towards the end – but I’d been so well forewarned, that I was quite pleased to reach the top and discover it wasn’t so awful as expected. I’d had a few warm-up little climbs to test the bike – and it didn’t handle AS BADLY as I’d expected but there certainly is an art to climbing out the saddle on a tour laden bike.

Reaching Portsmouth, we got some incredibly yummy dinner – lots of refillable salad and coke, and prepared to try to sleep in the reclining seats on the ferry.

Arriving at the port, we met a fellow traveller who had an awesome Brookes saddle with elegant matching bar tape on a classy bike that had recently sent him End-to-End – and a bloke from London Dynamo who was fairly chatty.. 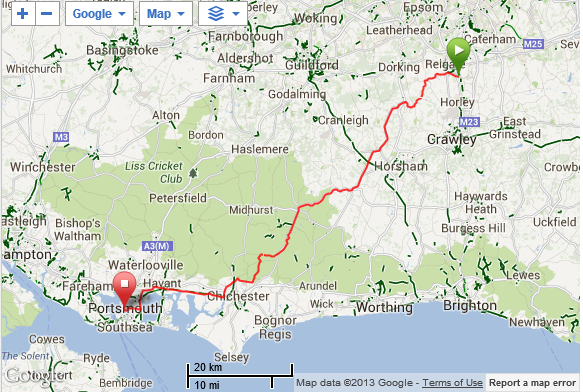 Day 2 – Caen – Brecey – 77 miles, 4521 ft climbing
After an interesting night spent trying not to push my feet into the face of the poor stranger in front, we were awoken by sharp lights and the first of many yummy pastry selections as we reached Caen. After breakfast, we ambled off the ferry (alongside a great many other cyclists off to watch the Tour) – and emerged blinking into the 6am sunlight.
Looks like Maurice didn’t quite record all of the ride – but it looked like this – I’m sure it’s quite clear where-ish we started: 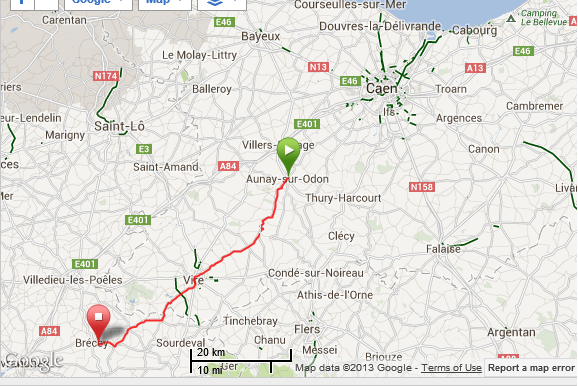 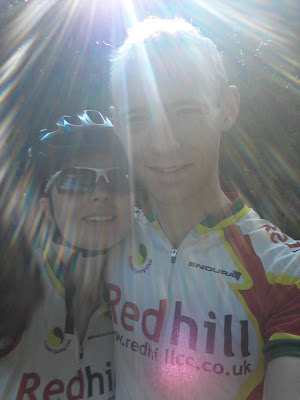 It was neither flat nor still (eg it was hilly and windy) but the ride to see the bustley town at St Quentin-sur-le-Homme was well and truly worth it, as the fans lined the street and got ready to roar ‘AllezAllez’ every 90 seconds or so. Old men clutched at crumply newspapers which listed start times, and I took my place next to a lady who took her seat between riders, only to stand and cheer every minute or so as a motorcycle heralded the entrance of a new set of wheels.
After watching ‘just one more’ rider, quite a few times, we headed through some sleepy towns to the most beautiful campsite around. A little more expensive, the site at Clecy had lovely lakeside restaurants (where they served us effectively 3 burgers, on baguette, smothered in cheese – well worth the wait) – and if you felt so inclined, swings, bouncy castles, a sandpit and a little café for coffee. 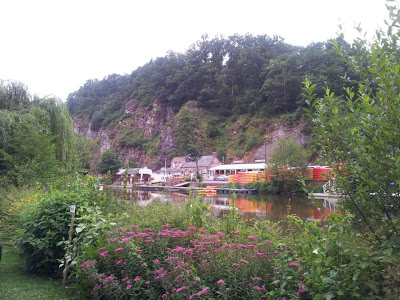 The only downside was that we had to get back up to the top of those big rocks the next morning…
Day 4 – Clecy – La Brevendent – 55miles, 2913 ft
Given I was carrying maybe 9-10kg of pannier et al, and Maurice had that + tent, the first few miles below weren’t easy:

But then we knew that would be the case when we set up camp..
It was a shorter day. Coming in and out of  Lisieux was no easy ride either – we had to take quite a main road, and I think by the end, we (at least I) were ready for sleep.
Unfortunately, that didn’t come so quickly, after a slight detour to a barren looking campsite led us to about-turn and find the next one…
The next 5 miles were a little more off-road than my skinny road tyres were quite used to.. but we soon made it to what can only be described as a “glampsite” – a very posh camp site with all the mod cons, at it did seem the average cost per campsite was rising.
Suddenly, everyone seemed to speak English, and most of the tents around us appeared to be more like rather impressive houses. Still, we lounged by the pool (yep – the free pool!), ate some very posh dinner (dining was a little fine, more bread was needed) – and admired the interesting looking man who seemed to be part of the scenery as he adorned the strange stately home / bar in his top hat and walking stick combo. 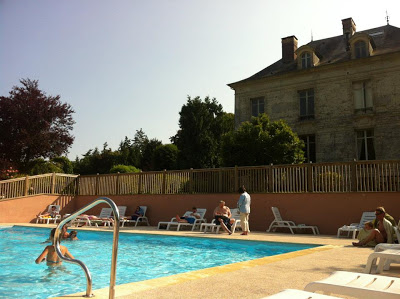 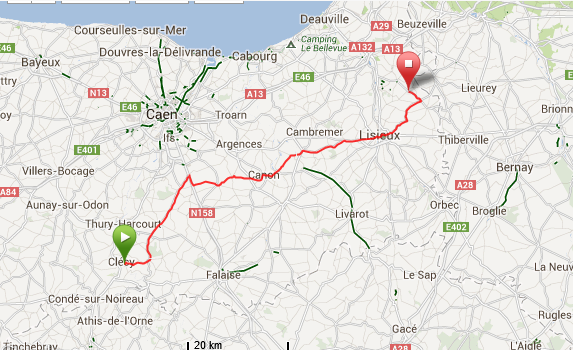 Day 5 – Le Brevendent – Caudebec En Caux – 45 miles, 2913 feet of climbing
This – firstly – was the notable day of “the incident”. The-Incident-In-Which I managed to consume a family sized baguette. On my own. Fine dining we may have enjoyed the night before, but a sudden calorie deficit, and a very yummy pot of honey resulted in the largest breakfast I’ve ever consumed. This being said, I did fire off at an exceptional rate once we were on our way (I was later told that Mr Brennan was a little concerned the energy might last all day. It did not.)

My huge breakfast paid off when we reached a mass of holiday towns around lunch time that were basically uninhabited – the villages ruined by holiday makers with second homes, we supposed. It was like a 30 mile stretch of hay-bail moment. Maurice was starting to dream in baguette, but I was still full of breakfast, which was helpful since he’s less of a bonk risk than me on long rides when hunger strikes.

Day 5 was mainly about getting across the Seine River – and we didn’t get lunch until we’d made it safely over the bridge. 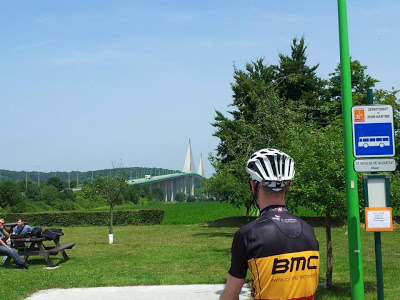 We stopped at a lovely little river side down, and realised there were two choices – push on for another 30mile (miles are slow on a touring bike.. we were averaging 25miles every 2 hours and it was getting late!) – or putting down camp. So – we did just that. 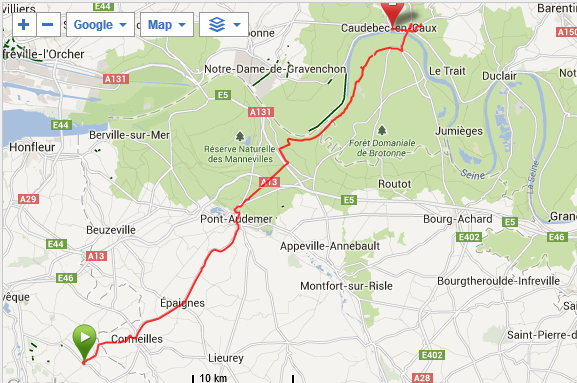 Day 6 – Caudebec En Caux – Dieppe – 70 miles, 4,000 ft climbing
France quite possibly saved the very best day of riding till last.
We wanted some extra miles, so we headed to the coast, in the direction of Fecamp, with the intention of riding along the cliffs (more hillllss) to finish in Dieppe.
The morning had a very different, busy atmosphere as Saturday markets pitched their stalls whilst we munched down Pain Au Raisin and bread rolls. A tour guide said his piece as he lead round some captive audience in beige slacks and sandals, and soon we were off.
The ride was by far the best. Lining the roads were ‘Presence de Cycliste’ signs which made us feel extremely at home on the hairpins. 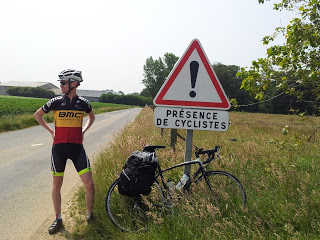 The coastal roads were gorgeous, and it was tempting to forget the extra 10kg weight on the back of the bike on some of the swoopy descents (less so on the climbs). 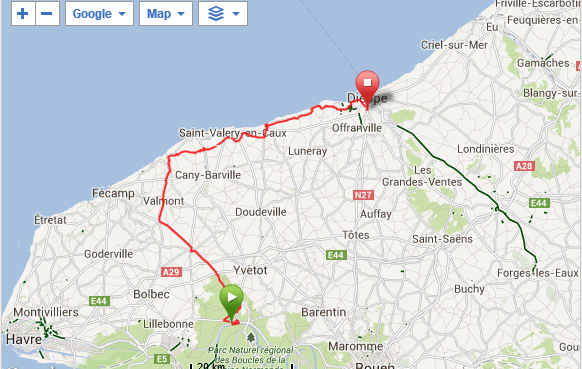 And of course – the final descent into Dieppe led to the luxury of an F1 hotel with warm showers, beds, and dinner – which was washed down with wine, a nutella crepe and espresso.
Richly fed, we rolled into the hotel, prepared to wake up at 3am for the ferry home.
Day 7 – Rather eventful morning – Dieppe – Newhaven – Redhill – 8miles, 341 ft climbing, then 40miles, 2073 ft climbing
We got lost on the way to the Ferry.
It was dark, and foggy, my bike was very heavy and there was a 20%+ hill. This all collected together to result in some panic, probably our fastest ever average speed on tourers, despite my actual sprint (running!) up the hill, in the dark, in cleats – because I simply could not get my foot into my pedal, and by the time I’d tried 5 times or so, I was too far up the hill to go back down to clip in.
Thankfully, after patrolling empty streets and checking google maps (many times) we made it – and there was just one booth open, about 20mins before the Ferry was due to leave. Sketchy. But we were somehow still first in line for breakfast (the wonders of being foot passengers).
The map below is upside-down, really – but it shows the ride from Newhaven – back to the door where we begun: 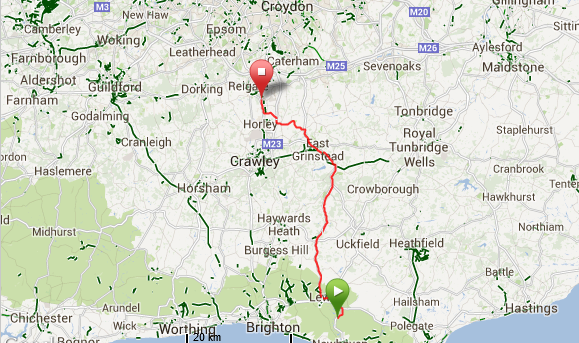 I’d add a closing comment – but it seems unnecessary. A week in which 425 miles took an alarming 32 hours of slow grinding – but totally beautiful scenery, and a wonderful way to spend an absolutely amazing week.

10 thoughts on “A little adventure around France”